Research’s team co-organized the panel ‘Displaced from the Donbas – The forgotten from the war in Ukraine’ with a Centre for Eastern European and International Studies in Berlin (ZOiS) on 5th of December 2017 as a part of AHRC funded project. The discussion focused on the demographic and socio-economic profile of the internally displaced, a range of political, socio-economic, and legal issues connected to the issue of displacement as well as the attitudes and identities of the displaced. The panel included Irina Kuznetsova, the University of Birmingham, Hanna Vakhitova from Kiev Economic School and Victoria Sereda, co-I in AHRC project from Ukrainian Catholic University and was moderated by ZOiS director Gwendolyne Sasse. The discussion was followed by a tour by British artist Mark Neville through the exhibition ‘Displaced Ukrainians’ which he developed in cooperation with ZOiS.

On 6th of December there was a workshop ‘The Displaced in Ukraine’ where the research’s team of the project ‘Ukraine’s hidden tragedy’ and academics from the USA and Ukraine discussed their papers. The articles from our group included: Gulara Gulyeiva ‘Support and Integration of Internally Displaced Persons: Stories of Loss and Belonging’; Vlad Mykhnenko ‘A land to die for? Assessing the impact of the Russo-Ukrainian war on the Ukrainian Donbas’, Viktoriya Sereda ‘Displaced cultural spaces: (re)articulation of identities in the case of the refugees from the Donbas and Crimea’, Irina Kuznetsova ‘Refugees and internally displaced people from Ukraine’s war-torn territories: confronting the politics of belonging and everyday experiences’ and Oksana Mikheieva ‘Not Quite Like Us’: Processes of ‘Othering’ and Perspectives on the Reintegration of ‘Inner’ Others in Ukrainian Society – The Case of the IDPs’. 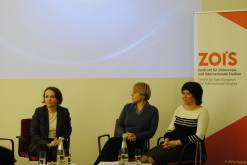 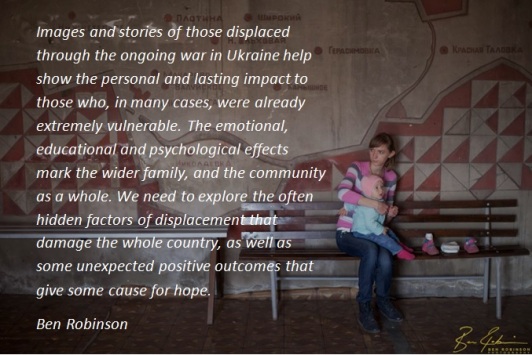 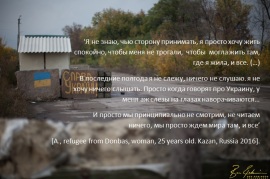